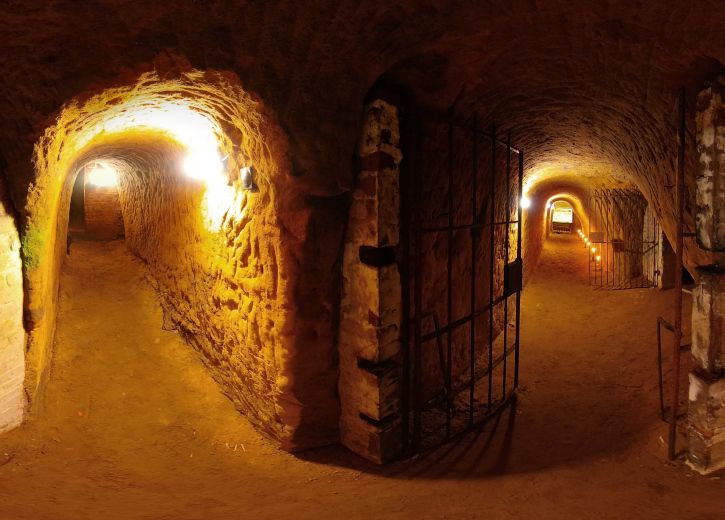 Use the Virtual Tour below to explore the Dorking Caves. Best viewed in full screen (button at bottom centre). Don't forget you can pan around each view with your mouse so make sure you look up the well heads when you have the chance. There is a map that can be toggled on or off with the red pin at bottom left.

This tour is a demonstration of principle. We have only included a few information pop ups but a great deal of information could be added such as the geology of the caves, old photos, videos of tour guides and any amount of information panels. This tour is available as a consultation document and we would love to hear what other contributors think about how much information ought to be included and where it might be best used. Please send comments to jim@antarctican.co.uk 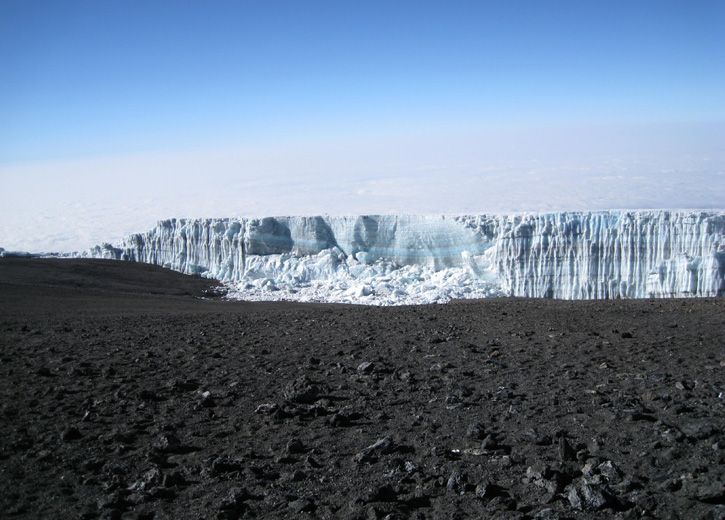 We are all Antarcticans. Some of us just feel it more than others.

Antarctica is a continent governed by International Agreement so we are all a part of it. No-one has detonated nuclear bombs there or used it as a dump for toxic waste. It is a place that has never had a war, or been mined for its minerals, or pumped for its oil, or dammed, or farmed. It is a vast section of our planet that has hardly been touched by humans at all. It has been a successful venture in peaceful international scientific investigation since 1959 and represents hope for the future even as its melting ice threatens the lowest 70m of our world.

In the meantime, in Geological terms, we are still in an Ice Age. My homepage photo wasn’t taken in Antarctica. It's a joke. An Easter Egg. I took the photo almost at the equator in 2010. It is of the Rebmann Glacier on Mount Kilimanjaro  in Tanzania.

Here you can see Mount Meru in the background 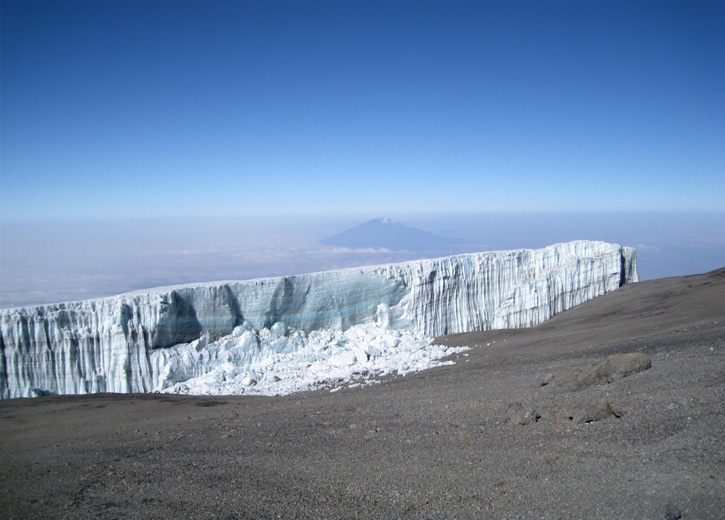 There are several glaciers on the summit at 5895m above sea level including; Furtwangler, Ratzel, Deeken, Kersten, Heim, Balletto, Diamond, Drygalski, Credner and the Northern and Southern Icefields. 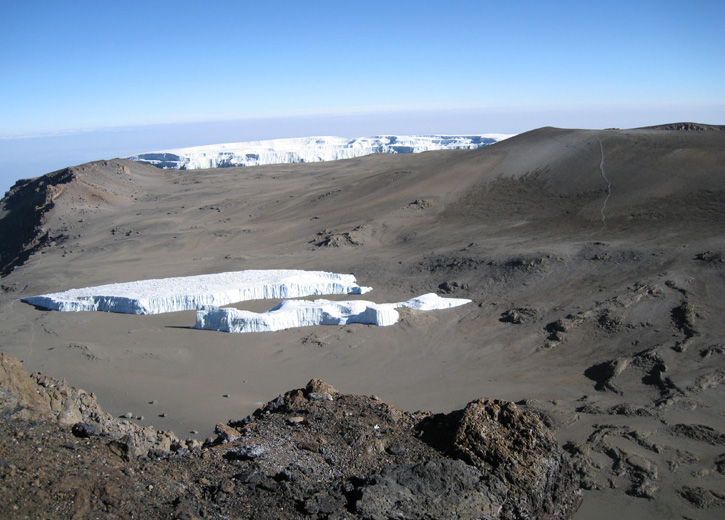 The mountain has periodically been covered with ice sheets and glaciers, the last sheet having been laid down perhaps as recently as during the worldwide drop in temperature experienced between 1400AD and 1700AD. It once had an ice cap more than 100m deep with glaciers extending well down the flanks to below 4000m. 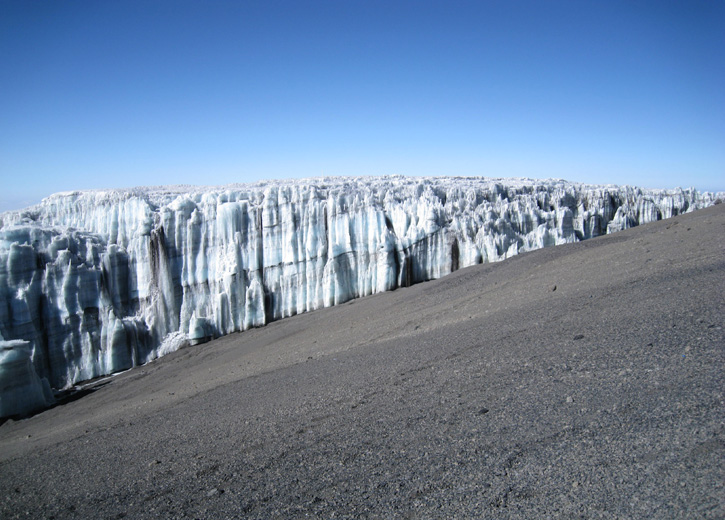 In 1889, German geographer Hans Meyer and Austrian mountaineer Ludwig Purtscheller became the first Europeans to reach the summit of Kilimanjaro. Hans Meyer reported in 1898 that the ice limit had withdrawn by over 100m since he first ascended 8 years earlier. 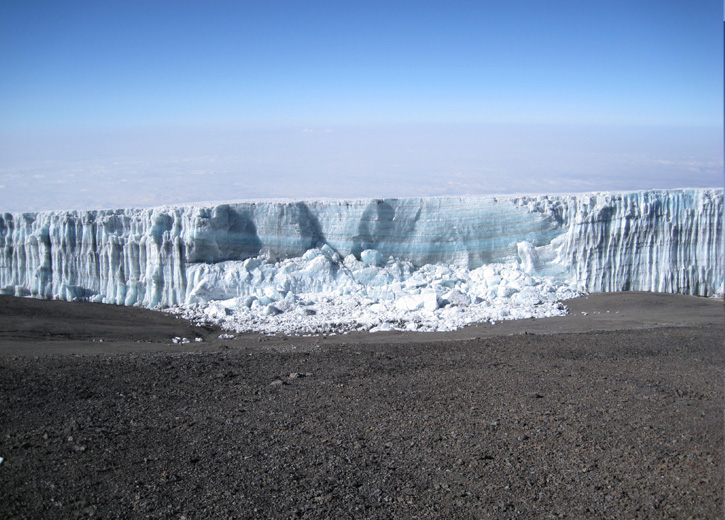 The glaciers on the summit have reduced in surface area coverage by 85% since accurate measurements were first made in 1912. It is thought that the glacier will have melted completely by 2060 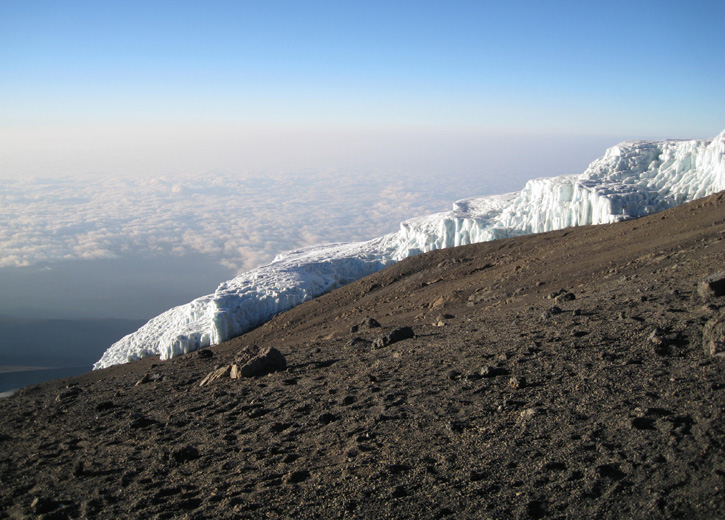 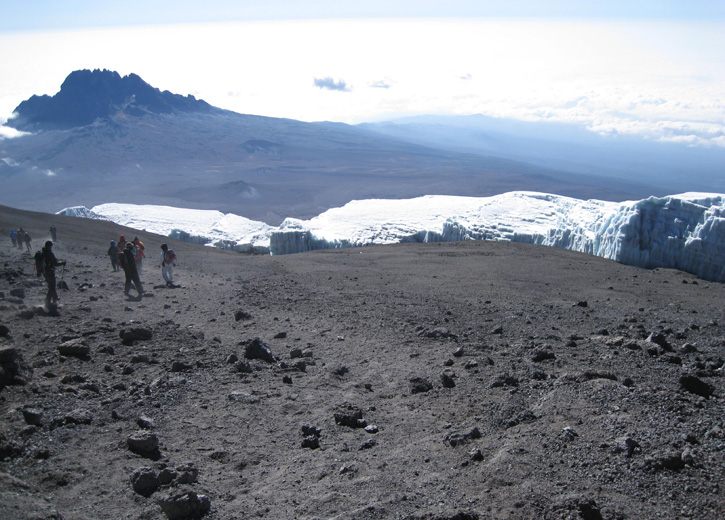 Originally formed from three large volcanic vents: Shira, Kibo and Mawenzi. The volcano grew in size as the vents grew in height and joined with each other. Eventually Shira became extinct and the cone collapsed, followed by Mawenzi, seen here at a distance of approximately 10 miles. 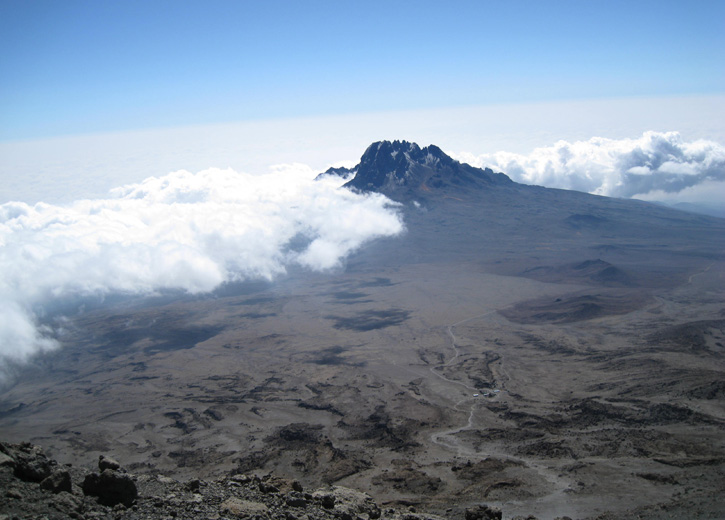 The Kibo cone remained active and around 360,000 years ago a huge eruption completely covered the old Shira caldera and created the saddle between Kibo and Mawenzi. 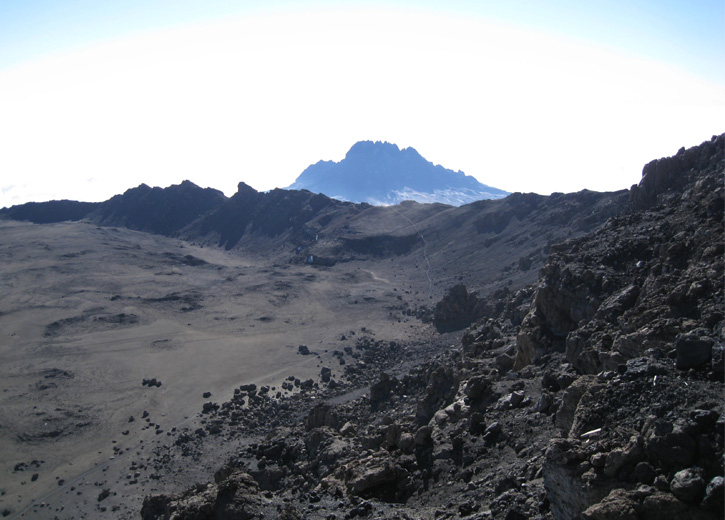 Kibo's last eruption formed the caldera which contains the Inner Crater and Ash Pit and the volcano is peppered with numerous small ‘parasitic’ volcanoes over it’s flanks. The cone has levelled out at its present altitude and the volcano is now classed as dormant, but not extinct. The highest point on Kibo’s crater rim is called Uhuru, the Swahili word for ‘freedom’. 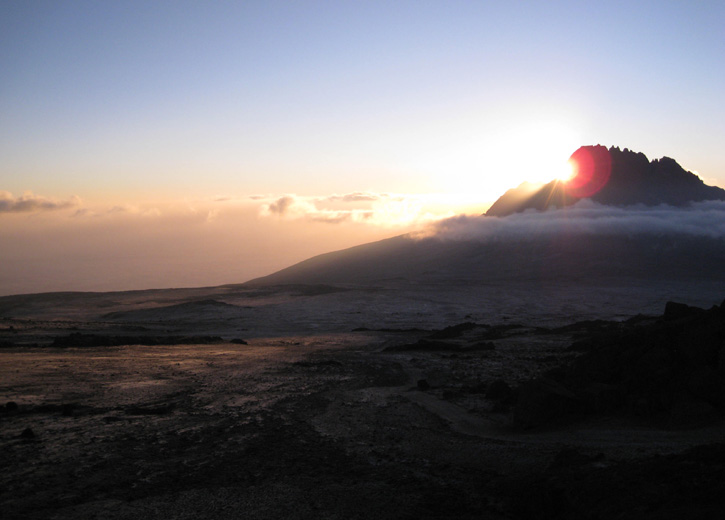 Mount Kilimanjaro is a massive stratovolcano in Tanzania that started forming as recently as 750,000 years ago. It is the result of the catastrophic tearing and thinning of the crust as Africa splits apart in a ‘Y’ shaped rip that goes from the Red sea, through Ethiopia and all the way down to South Africa forming the Great Rift Valley System.

The descent from the top takes you through a high desert 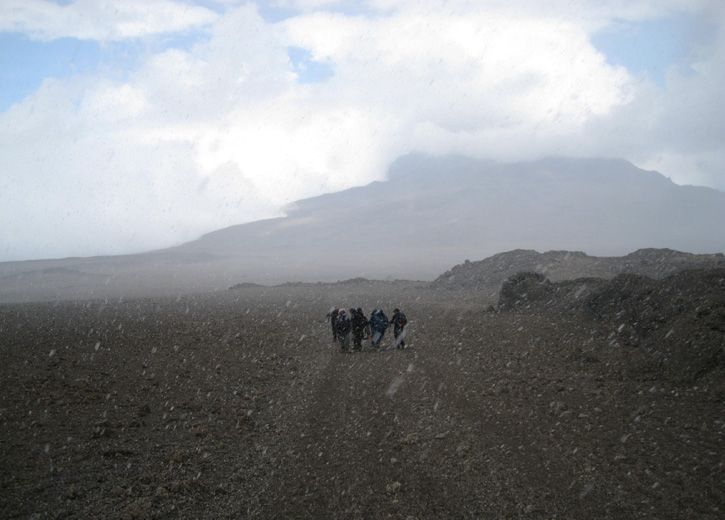 Through an Alpine environment 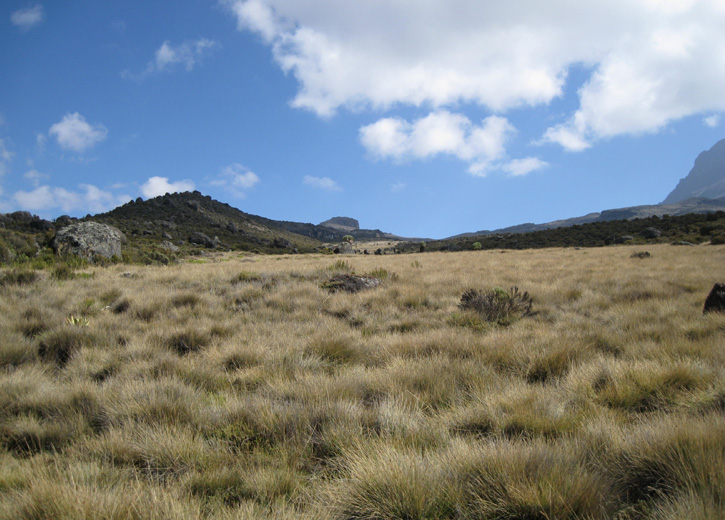 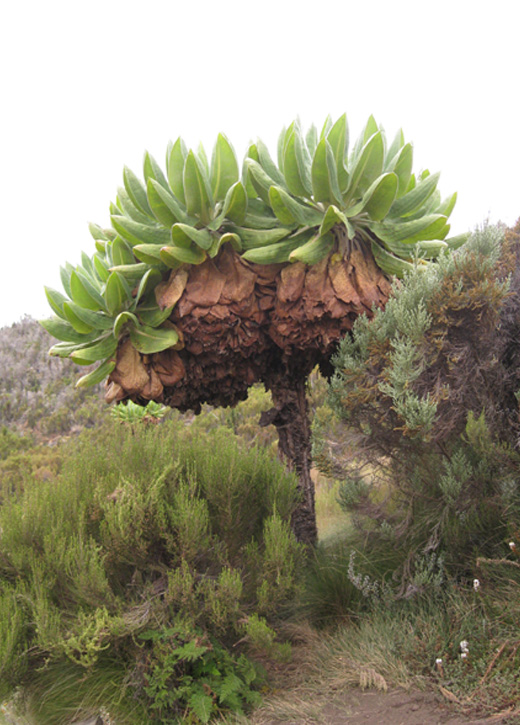 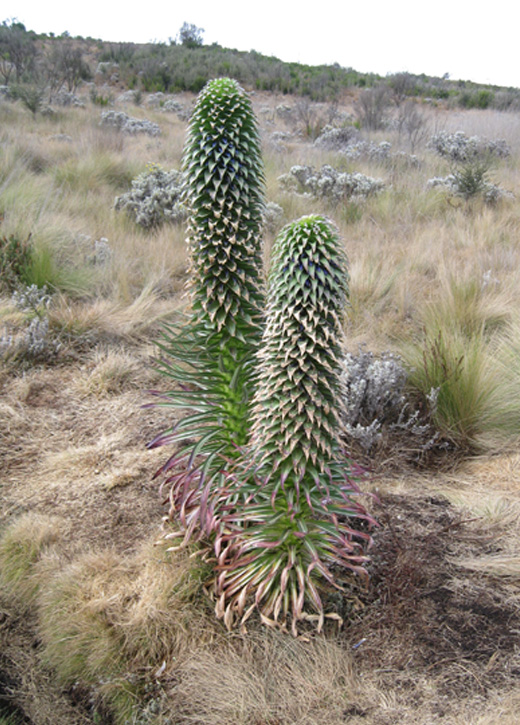 Down through the rain forest 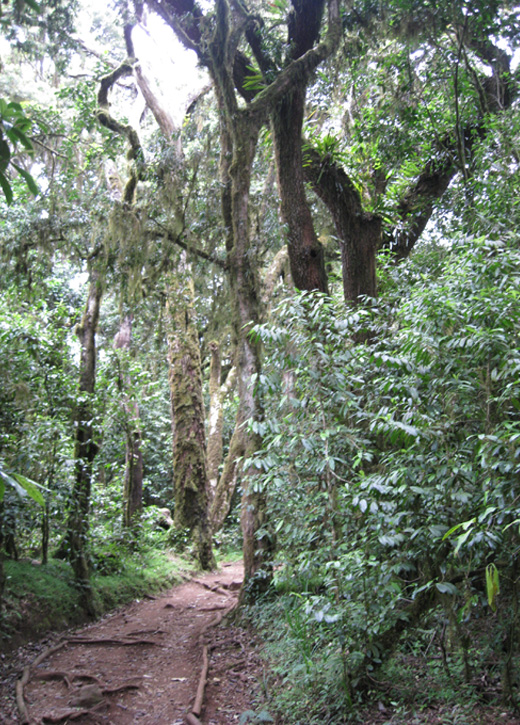 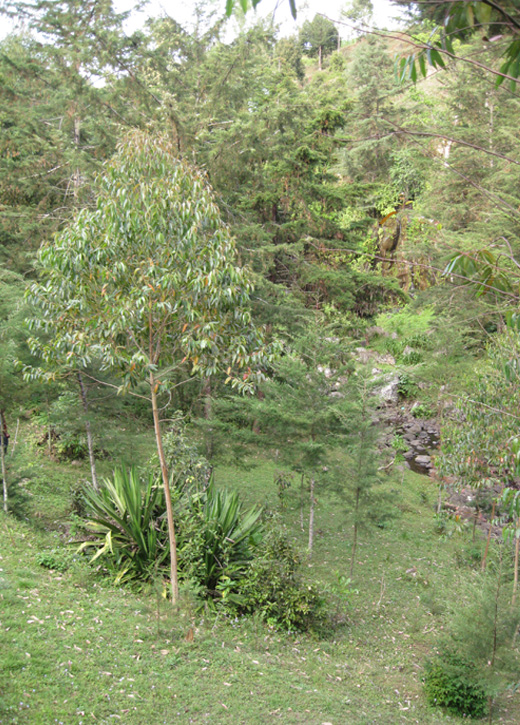